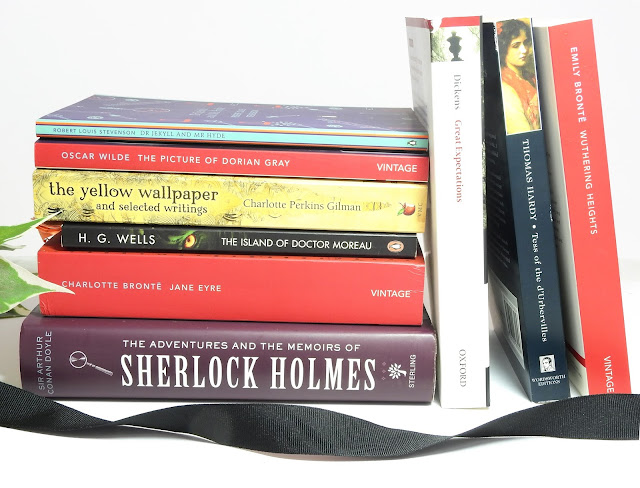 Hi, my name is Sarah, and I love all things nineteenth century. I studied English at uni and during my second year I realised how much I loved Victorian literature so made that my focus for third year and my MA. You’ll notice a theme of late-Victorian Gothic going on with a few of my recommendations as that’s what floats my boat. So, here’s some novels, short stories and collections from my favourite era that you need to read.

If you’ve not got a copy of this book you’ll be shocked at how short it is, it’s actually a novella with just over 100 pages. I first devoured it in one evening and loved it.

Dr Henry Jekyll believes there is good and evil in every man. He creates a formula that can separate the two sides and in doing so, he unleashes the monstrous, Mr Edward Hyde. The thrilling, dark novella set in London shows the duality of the characters and the setting. Crime, transcendental medicine and brutality feature heavily in Jekyll and Hyde. It’s a great example of late-Victorian Gothic in every sense. Go read it.

Whenever someone asks me my favourite book, I always have this in the mix. It’s the only novel Oscar Wilde wrote, and I simply love it. The novel caused controversy when it was first published and Wilde defended it to the end.

Dorian Gray is a young, beautiful man who’s narcissism is fed when he meets painter, Basil Hallward. After Dorian’s portrait is captured on canvas he wishes the image age instead of himself, therefore he’ll forever remain handsome and young. Soon Dorian notices this happening and his indulgences steer him in the wrong direction. A novel of excess, art, pretentiousness and vanity, with morality questioned at every turn. Absolutely beautifully written.

This is the short story that made me love nineteenth century literature. Merging the public and private life of a female protagonist trapped inside her bedroom after the birth of her baby, and suffering from depression. Her husband, a doctor believes he knows what is best for her, and believes she just needs to rest. However, being locked in a bedroom only worsens her illness. The wallpaper in the bedroom becomes her obsession and represents a variety of  themes within the story, mainly (in my opinion) the oppression of women by the medical profession. It makes you think, you can read it in an hour, highly recommend.

One of H.G. Wells’ lesser known novels, The Island of Doctor Moreau is my favourite. I used this and Jekyll and Hyde in my BA dissertation on pseudoscience in (say it with me) late-Victorian Gothic novels.

Edward Prendick is saved after a shipwreck and taken to an island that scientist, Doctor Moreau lives on with his creations. Moreau is creating human-animal hybrids by vivisection. This novel is one of the earliest pieces of science fiction, and asks questions about morality, cruelty and ethics. It’s quite fast-paced and a really good read.

My favourite of the Bronte novels, Jane Eyre follows the life of the protagonist from childhood to adulthood. We witness Jane live with an abusive family, her school life, her relationship with Mr Rochester, and more. The novel comments on various social issues including classism and feminism. You need this on your bookshelf.

I had to include Mr Holmes, and I wasn’t about to pick one collection (although I did in the above image as I quite like the spine of that particular book) because I can’t pick a favourite. The tales of Sherlock Holmes come in four novels and five anthologies of short stories. The first story I ever heard was The Speckled Band when I was about 12 and it had me hooked. I believe that was what started my love affair with crime fiction. And Sherlock. The stories are formulaic, evidence based and really quite clever. Sherlock Holmes is not a character you’d expect to like, (he’s impatient, egotistical, unsociable) but because the accounts are told by every-man, Dr John Watson, he places Holmes on a pedestal where all his faults are overlooked. If you’ve never read anything of the legendary Sherlock Holmes, I suggest you change that.

I must admit, I’ve not read every Dickens novel but I plan to, and this is my favourite of those that I have made my way through.

Similar to Jane Eyre, Great Expectations is a bildungsroman (coming of age novel/character grows up) following the development of orphan, Pip. He desires to be a gentleman and along his way, encountering many adventures, he meets a variety of memorable characters. With commentary on poverty and good versus evil, Great Expectations is a novel that will make you feel all kinds of emotions.

Tess of the d’Ubervilles – Thomas Hardy

You can always rely on Thomas Hardy to ask questions that were perhaps too early for Victorian society. Tess comes from a poor household but learns she might be a descendant from an ancient family. In search to find out whether she is in fact a d’Uberville she is met with tragic and challenging fate. This novel is full of highs and lows whilst addressing double standards, femininity and morality. It’s beautiful and sad, heartbreaking and eyeopening.

A lot of people know about Wuthering Heights, know the Kate Bush song, have heard of Heathcliff, but have never read the novel. The story is often mistaken as a love story when in fact it’s a tale of revenge. Heathcliff is adopted into a wealthy family and goes to live at Wuthering Heights. His relationship with Cathy develops and they become inseparable. Throughout the narrative their connection breaks down and Heathcliff leaves the estate. The novel is about vengeance, love, jealously, death, and madness. It’s passionate, intense and extremely atmospheric. Give it a read, it’s a must.

Have you read any of these Victorian novels?