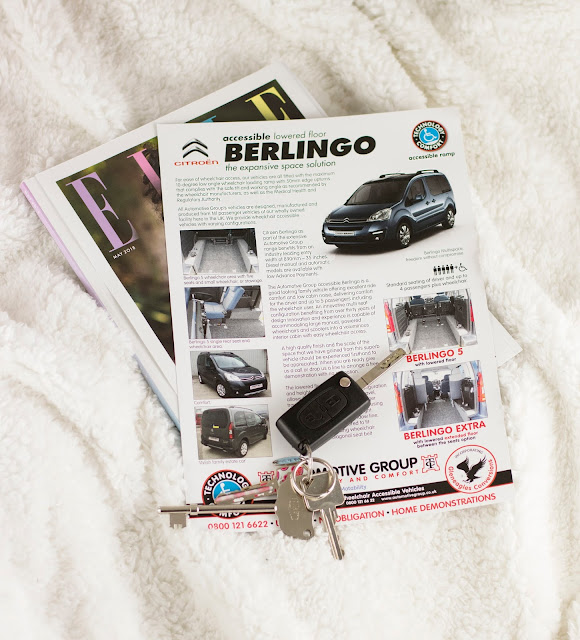 The other week I had a demonstration for a wheelchair accessible vehicle (WAV) because my current situation is no longer working for me. I currently have a Citroen Berlingo with a hoist that lifts my powerchair into the boot. However, it requires a lot of bending and a lot of messing about with carabiner clips. Now, I’m someone that suffers terribly with their hands and I have been unable to use my hoist independently for well over a year. My boyfriend comes everywhere with me so my powerchair can get in and out of the car; he even accompanied me for a coffee date with a friend, but waited in the car. As much as I appreciate him doing that, he really shouldn’t have to.

After much tribulation, I decided to give Motability a call, as I lease my car from them, to discuss my options. I honestly thought they’d tell me to wait another year until my lease was up before I could change from having an adapted car to a WAV.

What’s the difference? Basically an adapted car means that nothing needs to be changed to the chassis of the car, and any adaptions that are needed are added, for example, my hoist. With a WAV the framework of the car, in my case, the boot needs altering; it needs lowering and (sometimes) the exhaust and other bits moving so the ramp can be fitted. Since ramps work on a gradient regulation, the lower the boot, the less length the ramp will be. Another difference is the lease for an adapted vehicle is three years, and five years for a WAV.

Anyway, Motability were fantastic and terminated my current contract with them over the phone that day. I explained the problems I was having with the hoist and they agreed that the whole point of the Motability scheme was independence and I wasn’t currently getting that. They said I will keep my current vehicle until my new one is ready so I wouldn’t be without a car, and I can start the process of looking at WAVs right away.

If you’re new to the Motability website, instead of clicking ‘car search’ on the left-hand side, go to ‘advanced search’ and then ‘search for a WAV’. You also don’t go to car dealerships when deciding on what WAV works best for you, you go directly to the company that will convert the vehicle.

I decided that I would stick with my Citroen Berlingo as it is a good size taxi (as my five year old nephew calls it) and I find it really easy and comfortable to drive. I went with the Automotive Group, I called them the same day and we organised a demonstration for the following Friday. That particular conversion company are based in Newcastle but Motability told me to be on the lookout for ‘national’ companies as they have various employees all over the country.

My demonstrator, Paul was due to come to my house on Friday afternoon; he text me an update earlier on with travel details and I eagerly awaited his arrival. For some reason, I was really anxious but I often am when meeting new people. As soon as he sat down my mind was put at ease immediately; he was so friendly, kind and knowledgeable. He spoke to both my boyfriend and I about my needs, why we thought a WAV was suitable for me and how I would be transferring, if at all. As I am the main driver, I wanted to be able to store my powerchair in the boot and then get into the drivers seat. Some people stay in their wheelchair in the back, others drive their car from their wheelchair. There’s so many options which I think is awesome.

Next we went outside to the Berlingo WAV he was showing us. He explained everything in detail and I stopped him a few times for information to be reiterated as I am not too good at following instructions. He first showed us how to get the ramp in and out of the vehicle and asked both Ian and I to do it a few times so he could assess whether I was able to do it. The ramp was surprisingly light and very easy to handle, I didn’t have any problems using it and was pretty impressed with myself actually.

Next he asked me to drive my wheelchair into the boot whilst sat in it so he could show Ian how the chair is tied down if I am ever transported somewhere in my chair. This never happens as I quite enjoy driving but it was good to experience it and establish how simple it was. Once I was strapped in, Ian took to the passenger seat, Paul took to the driver seat and we went on a ride around the block. He said that it was important to do that so if I ever do need to sit in my chair in the vehicle, I am aware of what it feels like. Quite frankly, I enjoyed it, I was really high up and my queen complex grew significantly.

We arrived back outside our home and Ian was shown how to release my chair. I was quite worried about the next part as it involved driving my powerchair backwards down the ramp. I’m pretty shit at going in a straight line, so going straight and backwards was quite frankly terrifying. Alas, I did it slowly and like a boss.

Then it was my turn to get my chair up the ramp, fasten it down, get in the driving seat and test-drive. I had an identical car so knew the drive would be fine. Anyway, we turned my powerchair around so it was going up the ramp backwards and I slowly (slow and steady, my friends) manoeuvred my wheels into the car. After that I had to do up some seat belts to secure my powerchair into position and that was it. All the while Paul was taking photographs of me to prove to Motability that I was capable of using the ramp without help. Then I took the Berlingo for a spin, and finally removed the wheelchair from the back of the car.

Ian, Paul and I were all very happy with how I got on. I felt really confident and eager to start the process of swapping vehicles. We included a few other adaptions to my order that would be added to my new vehicle to make things much easier for me, and I intend on talking about that more in another post.

Paul has been in touch a few times since my demo and is always so lovely and genuinely caring, he’s such an asset to Automotive. I’m just waiting on some final arrangements with Motability and hopefully will have a new car date very soon.

I hope this has been helpful; I’ll keep you updated.