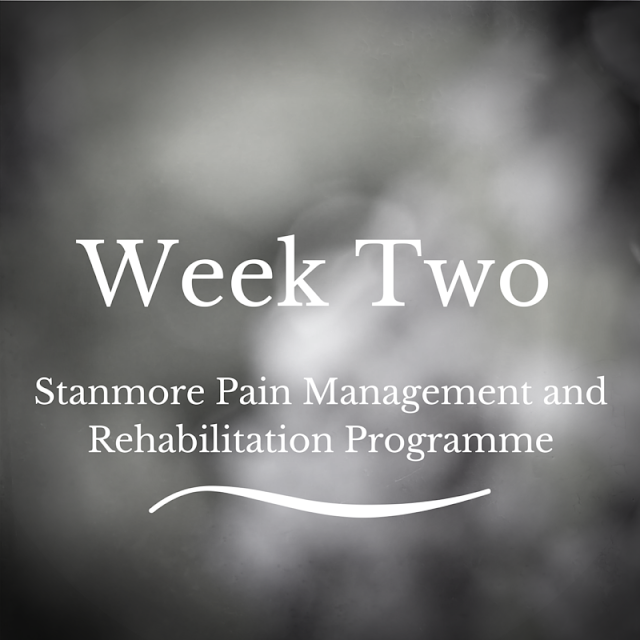 I stayed at a hotel again last night and had a decent night’s sleep. I arrived on the ward at 9 am and the nurses helped me in with my bags; after unpacking I went for a Weekend Review and the group shared whether they had achieved their weekend goals. I did, and was really pleased with myself. On Saturday I managed to iron one leg of my jeans and my boyfriend did the rest because I was pacing myself. I was glad that I was putting what I’d learnt into practice.
Then we had a group discussion on Anatomy and Healing which was led by my physiotherapist. We talked about the blood, bones, cartilage, ligaments, nerves, tendons and muscles. Did you know there are approximately 640 muscles in the body?
After lunch we had a group session on Goal Setting and were taught the difference between a long term goal and a short term goal. It’s important to keep goals as they keep us motivated, focussed and give a sense of accomplishment when the goal is achieved. It is also imperative to set goals that are attainable and to pace your goals. There’s no point setting a goal of walking to the shops if you can’t walk to the end of the garden.
My OT appointment was cancelled as she went home sick but I had a session with my PT who took a look at my shoulders, and unsurprisingly my right shoulder is a lot weaker than my left. I was given more exercises to add to my regime but one of them really hurt my hand. I must remember to tell Jason tomorrow as they were excruciating all evening and I could barely hold my crutch.
The final session of the day consisted of a discussion on Foiling a Flare-Up and thinking about making a flare-up plan catered to each individual. Posture, pacing, relaxation, distraction, stretching, ice/heat, communication, staying positive and identifying triggers are all really important in getting through a flare-up. I’ll always have flare-ups but my plan will be in place to help me cope with how I manage the flare.
We had fun in the evening, a few new girls came onto the ward and we laughed for hours.

I feel like I slept for about three minutes, I’m so exhausted and when my alarm went off, I wanted to hide. Stretching started at 9 am and I pushed myself a little bit too hard and subluxed my knee. It made a horrible audible crunch and felt like it was bleeding, I wasn’t impressed. I told my PT during my physio session and so he didn’t push me as hard. He checked my feet and ankles today. I walk on the outside of my foot with my left foot and the inside on my right, I also turn my hip inwards so I’ve been given exercises to stretch my calf muscles and more for my hips. I also told him that my hands hurt with the exercises he gave me yesterday so they have been adjusted.
I went back to the ward for Introduction to Relaxation and found out that laughter is a form of therapy. That’s probably why I’m enjoying being on the ward so much because all we do is laugh. Most of the girls on here are just awesome and we’ve had such a good time.
After lunch I had a one-to-one with the psychologist and I went in expecting to discuss a particular thing but ended up talking about something completely different as he veered the conversation off. I’d rather not go into detail as it was quite personal but I found it really helpful and insightful. I went straight onto my OT who decided that she would look at my hands and help figure out what aids and adaptions would help in managing my pain. I already have chunky grip cutlery but she gave me an Abiligrip for pens and a new wrist support for when I’m using my crutches and typing. Unfortunately they only had a support for my left hand so a right one has been ordered. I also found out that instead of the movement coming from my shoulders when I write/eat etc. it is coming from my wrists and fingers so I need to be conscious of it and change how I use my hands. Hopefully it will cause less pain in the long run.
Then we had a Pain Talk and discussed various aspects of pain and how it interferes with our emotions, mentality and relationships. We also learnt about various types of pain and where the sensation comes from.
My boyfriend came up in the evening as there was a talk for family and friends, I was so glad that he made it and it was good to see him because I missed his little beardy face. He brought my post and I had make up and stationery goodies. I’d bought Washi tape online so decorated my grabber in funky red flower tape. I had another good laugh with the ladies before bed and we sang Disney songs.

I woke up half an hour before my alarm and was absolutely exhausted; I could have easily fallen back to sleep for a week. We did Tai Chi again during our morning stretching class and it was really good, I don’t know how I managed to stay awake. I had an hour long break until my PT appointment; when it was time, my therapist looked at how I walked, changed my crutches and noticed that I put all my weight through my left leg when I’m standing and walking. He gave me a few more exercises and I headed off to a relaxation class back on the ward. We tensed and relaxed our muscles and it felt really good.
I had a tuna melt for lunch and then we had a talk on Coping Skills that focussed on assertiveness, I found it particularly useful as I don’t tend to express my needs, especially to strangers. The only time I ask for help from a stranger is if they are in my way. However, last week when I went out for a meal with my parents, we sat in a booth and the child with his back to mine kept kicking the chair and it was causing me pain; I should have been assertive and asked him to stop, but I never. I need to consider myself more.
I met with my OT and she told me about sleep hygiene, then looked at the position I sleep in – apparently, sleeping on my front is not good for my spine but she said sleeping on my side with a knee pillow can work. She also suggested a body pillow so might have to invest in one of them. I have to practice safe lifting and handling next week.
I went straight from there to the sport session and played a little bit of badminton but my shoulder started to hurt thirty seconds in so I had to stop. I also played catch and kept trying to use my left arm to take less strain from my achy shoulder. I came back to the ward earlier than everyone else as I physically couldn’t do much more and was in too much pain.

I had an okay sleep last night; I dropped off fairly quickly and didn’t even bother with my book because I was so sleepy. After Your Move, which involved basic stretching, I had an hours gap before I met with my PT. It was my last appointment with Jason as he was booked on another programme next week so my physio for week three is Sophie, who I’ve met a few times and really like. I made my weekend goals with Jason.

Goals
1. To help pace doing the laundry, using good lifting and handling techniques
2. To use good posture when watching TV using a timer for prompts
3. To practice using assertiveness over the weekend
4. To do physio exercises Saturday and Sunday
5. To do ‘Your Move’ stretches each morning
6. To download Workrave and to workout typing baseline

My appointment overran and I was a little bit late for the talk on Nutrition, we learnt about GI foods and how important it was to have a mixture of all of the food groups. After lunch we had a talk on Work Support and we discussed various ways in which a job (full-time, part-time, voluntary, study) could cater things for disabled employees/students. I told the group about the help I received from University and how it was crucial in helping me obtain my degrees. Once the talk was over, I was done for the day so did some writing and watched Great British Bake Off on my iPad.
The majority of the ward went out for a meal in the evening and it was such a laugh, we had an awesome time.

My alarm woke me up at 7 am and I slept a little better than the rest of the week. We did a group Your Move in the conservatory on the ward before a discussion group on Pacing which involved working in pairs, given a case study and determining how a chronically ill person could change his day-to-day life by pacing. It was quite interesting as the diary of the case study looked similar to most of ours before we started Pain Management. After that we had a Relaxation class that focussed on Visualisation and although I’m not very good at visualising, I found it really relaxing and was transported elsewhere.
Finally, week two was complete, I packed up the majority of my belongings and the nurses carried my case to my car. I said goodbye to my ward friends and drove home to be reunited with my boyfriend. I could totally sleep for a week.