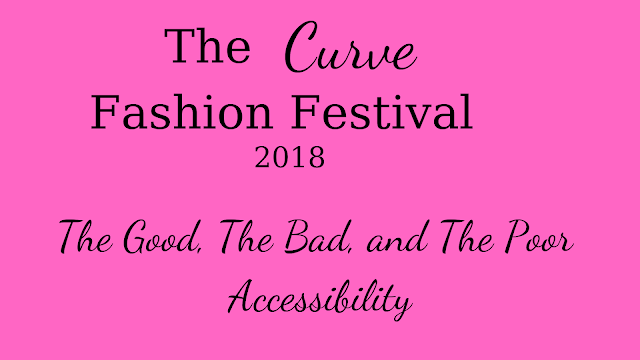 Over the weekend I went to my first ever fashion festival in St George’s Hall, Liverpool. I was on home turf. I travelled the four hours a few days before to stay at my parents so I could recover from the drive and spend some time with my family.

I’d been looking forward to it for months. I invited my mum along and we planned on spending the day with Beth and her mum; proper girls day out. We were all excited. We’d never been before and didn’t know what to expect but expected an awesome day.

Curve is a fashion festival for plus size people and it’s split between the Fashion Hall where all the stalls are and the catwalk where the catwalk (obvs) and talks go on.

Let me give you a rundown of how our day went.

We arrived in Liverpool in St John’s car park just before 10 am. Luckily as I was getting my powerchair out of my car, Beth pulled up and removed her self-propel wheelchair from her vehicle. We went downstairs in the lift and made our way across the road towards the massive building opposite. The front of St George’s Hall was fenced off because the Christmas market was up so we had no idea where we were meant to go. My mum asked a security guard where the disabled entrance to the fashion festival was and we were directed just around the side of the building. That was easy, in we went, only to be met with stairs. We found someone else and asked for directions and they told us we needed to go back outside and right the way round the building to the other side. There was a shortcut with steps that the Mum’s went up, and Beth and I zoomed downhill over uneven pavement towards the bottom of the gardens outside the hall. Then it was uphill. Now, I have a powerchair so it wasn’t an issue for me but Beth struggled pushing herself up this hill. It was uneven, steep and bloody long. I felt so bad as I breezed up it effortlessly whilst she exerted loads of energy.

We finally arrived and the Mum’s were furious. Not at us, at the directions we’d been given and that there was absolutely no signs for the show. We turned a corner to find a balloon arch and red carpet which was lovely and fancy but realised the person that told us to go the way we did had sent us the longest way around. I also found out that this was the disabled drop-off but the road had been cordoned off for the market. Another fail.

A person at the front directed us in and showed us the way to the lift. My mum doesn’t like lifts so she made her way to the stairs. Our tickets weren’t looked at or our bags checked. We took the lift to the second floor to watch the catwalk. We were the first ones in the room and a lovely member of staff moved chairs and made a new aisle so Beth and I could sit next to each other in our wheelchairs. Beth’s mum commented on how small the chairs in the auditorium were and how close together they were and if she hadn’t mentioned that it probably wouldn’t have crossed my mind as I always have a chair big enough for my fat arse. Considering the event is for plus size people the seating wasn’t the greatest.

I enjoyed the catwalk and ended up getting a few ideas on outfits I planned on buying in the Fashion Hall later on.

Then we took a lift down a level to the Fashion Hall (mum again, went down the stairs). We followed a long, windy corridor and finally found it. As soon as we went in, my mum told us it was far too hot for her and she’d wait outside. It was hot, like it was really hot and stuffy. But it was also cramped. The stalls were so close together, there was people everywhere, we were crammed in. It was horrible. I couldn’t see any of the clothes as I couldn’t get near enough. We didn’t even go down one aisle as it was way smaller than the other two and there was absolutely no way we’d get two wheelchairs down there.

I felt awkward and in the way. I must have apologised at least a hundred times. I was bashed into, whacked with bags and stepped over. Once I stopped my chair to look at something, I couldn’t get going again as there was a constant stream of people. In the end we made a swift exit for the corridor. We tried to go in again about twenty minutes later as it seemed like a lot of people had left but it was just as bad. I started getting anxious because of the crowd and the lack of space so again, took solace in the corridor.

So many people helped us get by people that had stopped in aisles, they were lovely and told us to stop apologising, that it wasn’t our fault it was so jam-packed. The majority of people were so accommodating and I am extremely grateful for that.

Mum and I decided we needed food, I’d skipped breakfast and had medication so needed some sustenance but there was nowhere to get something. There was a bar selling cocktails but I don’t drink and neither does mum, so we headed outside to the Christmas market. The cold air was just what I needed after that anxiety inducing, heat cauldron of a Fashion Hall. The cobbles that the market was on absolutely destroyed my back but I was determined to eat and cool down.

When we eventually went back in, I went up to the second floor in the lift and met Beth watching another catwalk show. During the break, I decided to go and find the disabled toilet. A sign informed me it was on the ground floor so off I went. I got out of the lift and a member of staff directed me towards the Fashion Hall. When I got there another member of staff told me I had come the wrong way and had to go back where I came from and carry on going around. When I finally found the toilet, the automatic push button wasn’t opening the door. I assumed that someone was in there so waited. I waited ten minutes and decided to push the door with my foot. It opened and nobody was in there. On the inside there was no lock on the door but a flip-switch on the wall to lock the door. I flipped it and nothing happened, the door was still unlocked. I did it again, and the same thing happened. I opened the door and a staff member was walking by and told me that it was broken. Apparently people had been using it instead of their own toilets and pushing on the door instead of using the automatic button, hence breaking the locking system. Great. Awesome. The member of staff said she would wait outside the toilet whilst I went to make sure nobody came in whilst I was in there. As I did a wee, Beth text me making sure I was okay as I had been gone for almost half an hour and my mum was worrying. Half an hour of misdirection and waiting on a broken disabled toilet. Amazing.

When I finally found my way back around the corridor to the lift, I had to wait because so many other people were using it instead of the stairs. Which is fine, but there was only one lift in the whole venue and the event was over two floors. This was really poorly thought out because it’s an event for plus-size women, we ain’t doing the stairs multiple times, pals.

Anyway, I made it back to my peoples and my mum looked in pain. She’d already been suffering in the morning with her inflammatory bowel condition and she was uncomfortable. We watched the amazing talk with Hayley Hasselhoff and M&S, I got a selfie with her afterwards at her meet and greet and we left. I wanted to stay longer to continue watching the talks but my mum was struggling and I wanted to get her home.

There was so many things that ruined my day; the constant misdirection, the lack of signs, the broken disabled toilet, the hot, cramped, claustrophobic Fashion Hall, the lack of places to get food and drink, there only being one lift, feeling like I was always in the way, the halls being way too far apart and having nowhere to sit and chat, to name but a few.

But there was a handful of things I loved; I loved meeting people I speak to online, even if I didn’t see everyone, those that I did meet were so lovely and I wish I’d have taken more selfies. The catwalk and the talks were amazing and inspiring. I also got to meet Hayley Hasselhoff and the beautiful Alexandra from Love Island. I was also complimented by complete strangers on my outfit, my hair, and my makeup multiple times which was really nice. And I spent the day with my gal, Beth.

Since the event the Curve team have put out a statement confirming that they will be making changes to next years venue and working with disabled people on access needs. And I’ll be one of those people.

I was really frustrated and disappointed during and after the event on Saturday so emailed them to explain this. I also offered to consult on accessibility because this event can be amazing for everyone and if I can help in any way, I want to. I want to go back next year, I want it to be better and this way it’s so much more progressive.

Access matters and I’m so glad TCFF are listening to our needs. It shouldn’t have happened this year or at all, accessibility should be a top priority, but here’s hoping all future events go without any access issues.

Check out what Beth had to say about her experience at the festival here.

Are there any specific accessibility need you require at an event?