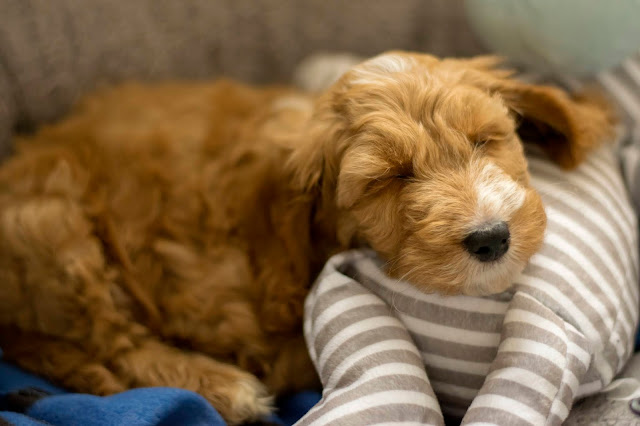 Teddy is now 13 weeks old, he’s our little ray of sunshine and has brought a lot of happiness into both mine and Ian’s lives. We’re both pretty much besotted with him; as you’ll see from both of our social media accounts (mine, Ian’s), he’s literally all we talk about. Despite the all-encompassing love we have for our adorable diddy doggo, we were tired af for quite a few weeks. And as someone with chronic fatigue syndrome, I’m used to being tired, but our pooch pushed me to a level I never want to go back to.

Puppies are meant to sleep about 18 hours a day; we noticed Teddy would wake up, toilet, eat, play for ten minutes, go back to sleep during the day and repeat. During the day he slept like an angel, he looked cosy, he snored, he twitched adorably whilst dreaming…but at night, it was another story.

I’ve grown up with dogs; I lived at home when my brother brought his German Shepherd pups home; I expected a few sleepless nights with our sweet-faced Cockapoo. We knew we wanted him to sleep in a crate in the kitchen, we made it comfy for him, we had a blanket with his mums scent in there, the crate door was open so he could go the toilet on the paper on the tiled floor, we left cuddly toys and a nightlight. On his first day home, he loved his plush bed and snuggled down onto it as soon as he was tired. I thought it was a great sign. Lol, I was wrong.

Night One
Teddy was put to bed in the kitchen with his crate door open and kitchen door closed. I was very adamant I wouldn’t be babying him as I previously had a dog with awful separation anxiety and I didn’t want that with Ted. As soon as the kitchen door closed he kicked off; he cried, he yelped, he scratched at the door.

Ian and I lay in bed almost crying as we felt like the worst dog parents on earth. I put earplugs in and tried to ignore him but they didn’t help at all. There’s only the living room between the kitchen and the bedroom as we live in a small bungalow and we could hear everything. After a few hours Ian decided to get up with him; he slept on the sofa and Teddy soundly beside him on the floor.

Night Two to Eight
My brother works with and trains dogs, plus has his own so I needed his advice. He reminded me that with his puppies he had them sleep in his bedroom for the first few nights to get them used to being away from their siblings and mother, then gradually moved them downstairs and into their crates. After hearing this, Ian and I felt like we needed to give Teddy some time to adjust being separated from his family and familiarise himself with his new surroundings.

Ian made a pen in the living room with Teddy’s crate and enough room for him to use the paper in the night. Ian slept on the sofa for a week so Ted could see and hear him but not be near him or destroy any of our furniture. With Ian in the same room, he slept all through the night with no problems. 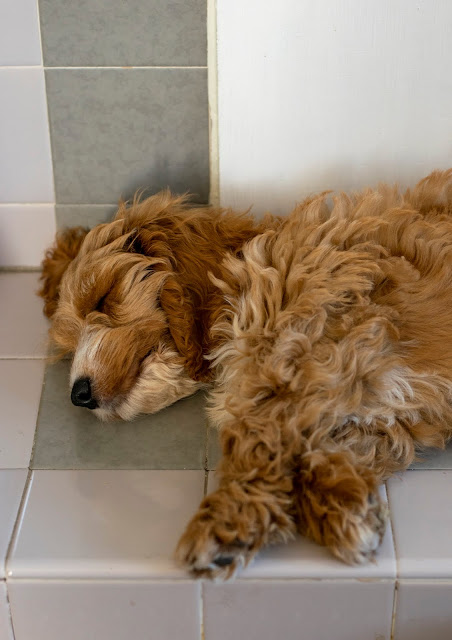 Night Nine to Twelve
As Teddy was sleeping really well in the living room, albeit with the company of his dad, we decided it was time to try the kitchen again. We wanted the kitchen to be his den, we didn’t want him sleeping with us and we needed to break the puppy separation anxiety. Again, the crate door was left open as there’s nothing in the kitchen he could break, chew or ruin; we gave him one of my blankets with my scent, a hoody of Ian’s, toys and treats, but as soon as the kitchen door shut, the meltdown began. He cried the whole night.
I lay in bed praying. I’m an atheist and I was praying to my Nana and Grandad, willing them to comfort him, wishing for some peace, for silence, for a bloody good nights sleep. I was more than sleep deprived, I was talking to my dead relatives. Ian slept through the yelping and I lay in bed, wide awake, close to smashing my head against the wall. Every time Ian let out a snore, I felt like suffocating him with my pillow. I have absolutely no idea how that man slept through the pups whining but I wished I could.
I ended up waking Ian up at 6am to deal with Teddy so I could sleep, and they both went back asleep in the living room.
Night Thirteen
Ian accidentally fell asleep on the sofa watching telly but Teddy stayed in his crate in the kitchen all night, with the kitchen door slightly ajar so he could see Ian. This felt like a bit of a breakthrough.
Night Fourteen
Teddy had his second vaccinations and was allowed in the garden, he went out late in the evening with Ian and ran around tiring himself out. That night he slept in the kitchen, alone, with the door shut until 5:30. He made two whimpering noises and when he realised it wasn’t time to get up didn’t make another peep until 7am. He was awake properly then and had a little cry but Ian waited fifteen minutes after he stopped to get up to him.
Night Fifteen
Again, Teddy played in the garden with Ian at around 11pm and he slept until 7:40. Ian didn’t get up with him until 8:30 so he gets used to getting up on our terms.
We’d cracked it, hadn’t we? 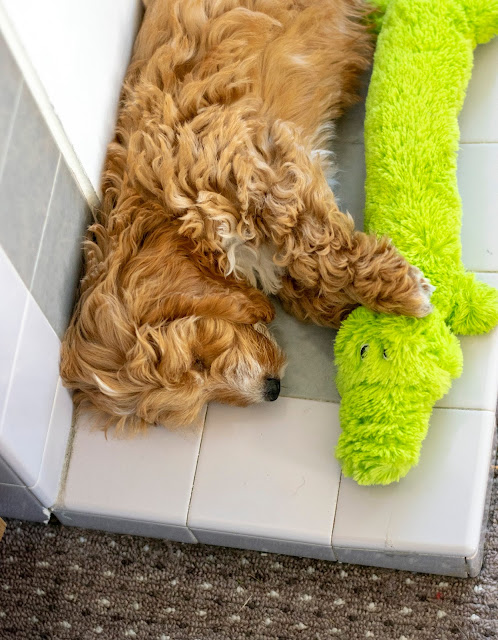 Nope.
Night Sixteen to Twenty
Teddy happily takes himself off to bed when it’s bedtime but kept waking up at 4am crying. Neither Ian or I understood it, he’d been doing really well, he’d been sleeping; had something spooked him? I was getting pretty frustrated and thought he’d never sleep alone or through the night by now. It was stressing me out, the stress was making me tense and that meant I was in a lot of pain. Plus sleep deprived.
Ian and I took turns getting up with him and we’d ignore him and let him fall asleep in the living room whilst one of us were on the sofa. We should have really left him in the kitchen but our neighbour wasn’t making things easy for us, and didn’t sympathise with us having a needy puppy.
Night Twenty-One
We came to the conclusion that play-time before bedtime was not the best option as it was waking Teddy up too much. We were expecting him to sleep when he’d been playing and getting far too excited. That night, Ian took him outside to go to the toilet and they just chilled, no fetch, no tug-of-war, just downtime. He slept better that night but was still up at 6.
Night Twenty-Two
There was a change today, Teddy went on his first ever walk with Ian, and we both hoped the walks would knacker him out. He was experiencing more, he was venturing outside his fish bowl of the house and garden, he was meeting people and dogs, he was shattered. He slept so much better. He went to bed in the kitchen by himself and wasn’t bothered when the door closed. He didn’t make a sound.
He still woke up at 6am though and I really wasn’t impressed as I’d been awake until 2. I got up, went to the toilet and lay on the sofa, leaving him in the kitchen. He whimpered a few times and I told him NO and he stopped. Then for some reason, and I really don’t know why I thought of this at six in the morning, I decided to put a talking radio station on. I think I Googled the night before ‘why the fuck won’t my puppy sleep through the night?’ and it was a suggestion, and I just went with it. I left my phone on the sofa with some dude talking about deep sea diving and I fell asleep, and so did Teddy. I woke up at 9:45, shit myself because I’d missed his morning feed, woke Ian up and I dragged myself back to bed whilst he did pup duty.
Night Fuck Knows to Now
The night after we put a radio station on for him again and he slept until 7:30 and has been doing so ever since. I get up with him at 7:30, a few times I’ve woken him up, let him in the garden for a wee, put him back in the kitchen and Ian gets up with him around 9.
Hopefully he’ll start sleeping in more as me and Ian are both night owls so we’re trying to get Teddy used to our routine, but right now, it’s fine, it’s working, he’s sleeping, we’re sleeping.
He also hasn’t gone the toilet in the kitchen overnight for weeks, he potty trained really well and quickly, which is awesome.
So, yeah, the puppy sleeps at night now, I don’t have to bang my head against a wall and I can actually enjoy the comfort of my cosy, new bed. Perseverance was key, we had to change things up to work for us, for Ted and for our neighbour. I almost want to pop out a baby and see if she complains about that crying but I think having a kid out of pettiness might be taking petty a bit too far.
Teddy is a sweetheart, he’s such a loving little bubba and even when he was keeping me awake for weeks on end, I couldn’t be mad at him because he’s just too cute. We also didn’t give in to him, which I did with my previous dog. As difficult as it was listening to him whine and whimper, he needed to get used to being alone and self-soothe. The radio and his walks definitely changed his sleeping habits and we can all sleep soundly now, and I for one, am very happy about that.
There’s an introductory post dedicated to Teddy here, and you can follow his adventures on Instagram here.