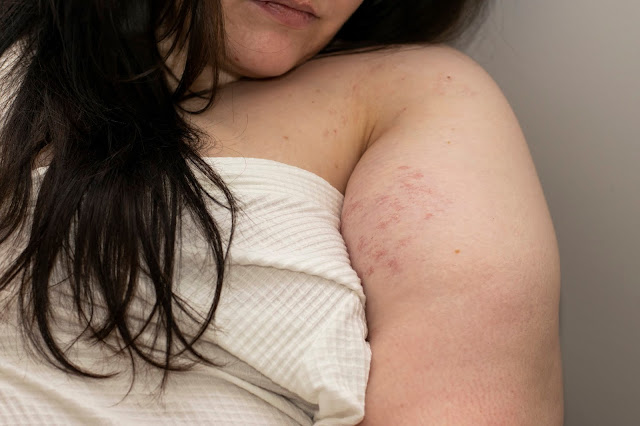 Do you ever look back at things you used to worry about as a child and wonder why you wasted so much time thinking about them? Things that kept you up at night? Things that you made a big deal out of? Things that were so small you don’t even think about now?

My weight didn’t become an ‘issue’ for me until my early teens but before that my main worry, and I mean, it used to make me feel like an alien, was those red dots on the top of my arm and shoulder.

I’d never seen another kid with those weird marks, none of my family members had them, my brother never, what the hell were they and why the hell did I have them?

And the thing is, nobody ever said a word about them. I was never teased, it wasn’t commented on, I don’t think anyone ever even noticed them, but I knew they were there and they weren’t normal so I needed to get rid of them.

My family constantly told me I was beautiful, that there was nothing wrong with my arm, that I was perfect blah blah, but I was stubborn and only saw flaws. And I wanted to fix this particular flaw.

These little red marks on my skin had such an impact on my life that at the age of ten my mum took me to our doctor to see if he knew what it was and if anything could be done about them. I was convinced the doctor could do some sort of operation to remove them and was actually excited at the possibility of having surgery to make my arm blemish-free. I was desperate to be completely free from those weird patches like all the other girls in my class.

And that’s exactly how I viewed it, it was disgusting, unnatural, weird. 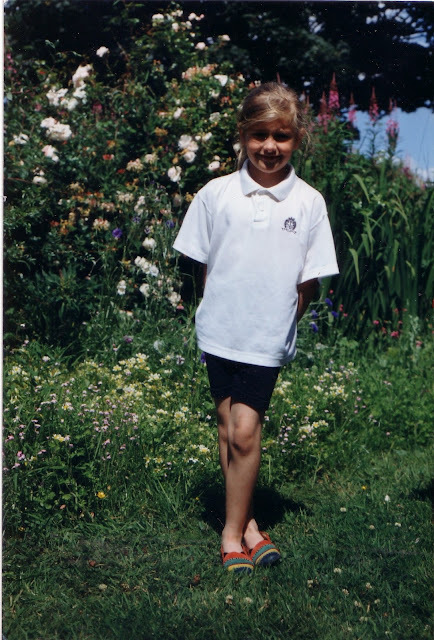 I went to see a dermatologist who told me that they were broken blood vessels and was referred to Alder Hey hospital for laser treatment. My mum explained multiple times how she didn’t think it was necessary and urged me not to go but I was adamant. If they could laser these things off my arm, great.

Two hours before each laser appointment, my mum had to apply ‘magic cream’, which I later realised was actually anaesthetic cream, to the top of my arm and shoulder, then cover it with plastic so it would numb the area sufficiently for my treatment. However, no matter how much cream she applied, I always felt the procedure. I’d lay on the bed wearing those weird orange glasses to protect my eyes from the laser trying not to cry whilst my arm was zapped. The snap of the laser was loud, painful, and I could always smell burning.

It hurt, it hurt a lot but I’d endure it because I wanted a normal-looking arm. I told my mum and the nurse every time how much it hurt and mum always told me to stop, but the nurses were puzzled because I shouldn’t have been feeling a thing; the magic cream should have numbed my arm enough. They always looked at me like I was lying or that mum hadn’t applied it properly but I wasn’t and mum put loads on.

At my initial consultation it was estimated I needed four treatments but when I got to my sixth appointment and was seeing no difference, it was decided ten would be needed.

I went to ten painful laser treatment appointments over almost two years and it made zero impact. My arm looked exactly as it always had. I was gutted. I was stuck with it. I’d have to cover it up for the rest of my life. I’d never wear a vest or swimming costume again.

I can’t remember what it was that stopped me worrying about it. I can’t remember when I started accepting the dot-to-dot on my arm but when I hit thirteen, my health declined massively and I guess I had more important things to worry about. I was in too much pain to care about some little red spots on my arm, they didn’t matter, they were nothing.

At nineteen I was diagnosed with hEDS (hypermobile Ehlers-Danlos Syndrome) and found out that some people with the condition don’t find analgesia from certain anaesthetics. It all made sense then. It was clear why the magic cream was wasted on me and why each laser treatment was painful.

Now, at thirty-two, I sit here writing this wearing a short-sleeved tee, the redness on my arm brighter and more prominent than ever and I don’t care one bit. I wish I could go and tell the ten year old me that it’s not an issue, that her body is perfect and that those marks don’t define her or even matter. I used up valuable kid-time worrying about them when I didn’t need to. Hindsight is a great thing and I’m always learning new things about myself; I’m just glad I got over that early on.

It’s still wild to me that I put myself through laser just to fit in, even though I already did. I was popular, had lots of friends and was a happy child, yet I had the biggest insecurity that only my closest relatives knew about. I think if I’d have told friends my age and they’d have reassured me, I may have acted differently but I was too embarrassed. I went to extreme measures and it didn’t even work.

I also think it’s really important that we talk about these things and make sure kids don’t hate their bodies because they’re extraordinary, no matter how different.