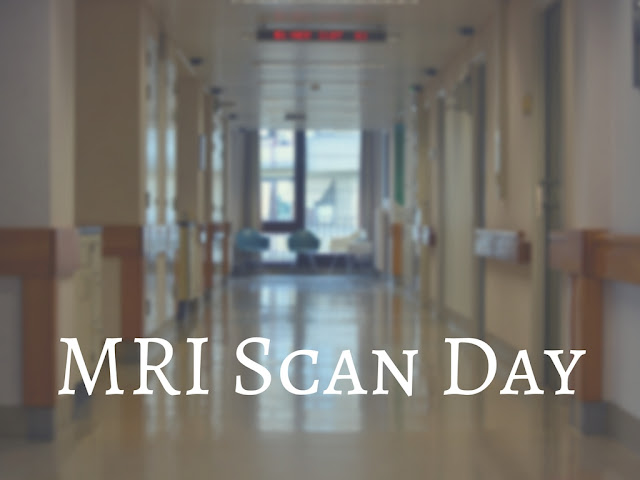 I’ve been hella lucky to have two MRI scans (sense the sarcasm?) within six weeks of each other. I usually have at least one per year and have done since I was a teenager, yet they still bother me. I’m claustrophobic and they freak me out; so a few weeks ago I wrote a post including some valuable tips on how to prepare for an MRI, you can find that post here.

Today’s post is very different; today I’m going to share a day in my life on the day I had my most recent MRI scan, which was on Sunday 25th June at 4 pm. Yes, I can’t even escape hospital appointments on the weekend. The joys of having multiple chronic illnesses *cheers*

I woke up on Sunday morning with a banging headache, luckily it wasn’t a migraine but it was the most unpleasant pulsing sensation in my head that I really didn’t need when I was having the noisiest scan in the land. I took some meds and chilled in bed catching up on social media before I had to get ready to leave for the hospital.

Sunday’s I like to chill out and do nothing, so having to get ready and go to the hospital already had me in a bad mood, but having the headache and burning up were not anywhere near what I had in mind and I really wasn’t feeling it.

Ian and I got in the car, I blasted the air-con in the hopes of cooling me down, or even better – freezing me to the core, and we headed in the direction of Kettering General. It’s usually a bloody nightmare to park there and we have to add at least half an hour to our journey but we found a space as soon as we got there and it was one less thing to worry about.

My head was still thumping, my back had started to ache, I needed a drink and a wee. As we arrived twenty minutes before my appointment, we popped into the hospital shop, I bought a much needed bottle of water (I always forget to take my own drink) and then got stuck in the disabled toilet. It was only momentarily and because it was poorly designed but I managed, and all was well.

As I’d been to the MRI department a month before I knew I had to fill out a form that was propped on the table and wait for a member of staff to come out and get me. Within minutes a nurse called my name and we went through the locked doors. He told me I would have to change into a gown and transfer from my wheelchair to their crappy uncomfortable scanner-safe one. I’d sat in that chair last time I went for fifty minutes and was in agony before I was lying in the scanner.

Ian helped me change into the sexy over-the-head gown. It’s weird but even though they’re trickier to get on, I prefer them because at least they cover you a bit more than those awkward gowns with the ties on the back. You can tell I spend too much time in hospital, I have a favourite style of gown. Wtf, Sarah?

Anyway, I had to leave my knickers and socks on but remove everything else. I could keep my piercings in as they’re not magnetic, and I didn’t have time to take them all out anyway. I didn’t need Ian to come in with me so once I was in the shitty chair the nurse wheeled me down to one of the scanners. He was really chatty, friendly and put my mind at ease. I waited a few minutes whilst they finished up with another patient and then I was wheeled into the huge white room with the dreaded tunnel I’d spend the next half an hour in.

I transferred from the chair to the table, placed my head in the cushioned crevice-thingy (so technical, I know) and waited for instructions. I felt fine. I wasn’t anxious. I had no concerns. The nurse took my glasses off and put them on a table to the right, put some bulky headphones on me and handed me a panic button. He told me I could be heard at all times and if I felt uncomfortable, scared or wanted to get out, to push the button. He then told me to close my eyes as he was placing the cage over my head.

I was having the scan on my neck and left shoulder as I’ve been experiencing worsening nerve pain that is severely affecting my arms functionality and is just pure agony. I can’t have clothing touching it when it’s flaring as it’s so hypersensitive, and it’s just all-round hell.

I was then moved into the scanner and cool air blown on my face. The technician told me through the headphones that the scan was starting and I began singing Alter Bridge songs in my head.

Then I was moving out of the machine and two nurses were stood over me. Apparently the head cage hadn’t connected properly and they tried to manoeuvre it but it wouldn’t click into place. I was told it didn’t matter as I wasn’t having a head scan and I just needed to keep my head very still. I was planning on keeping still anyway, lads.

They pushed cushions either side of my arms which slipped when I was moved back into the scanner, so I was taken out again and the cushions repositioned. They stayed in place the second time and the scan finally began.

Luckily my headache had subsided but the noise of the scan was aggravating. I spent ten minutes listening to the odd sounds that the machine made and singing songs in my head before One Republic began blaring through the headphones. Then the scanner got even louder. The tech clearly thought it could be drowned out by a bit of music but it didn’t happen. Although it did make me relax a bit more.

Then my shoulder began to make itself known and the pain was pretty bad. I tried to ignore it because I needed to move it but couldn’t so there was nothing I could do. I sang along (in my head, I don’t give free concerts) to the songs that were played and wondered how much longer I’d have to lie there.

Next minute I had a bright idea and I felt like testing myself. Since I’m always so scared having an MRI I thought I’d open my eyes whilst lying there and see if I could cope. It probably wasn’t my best idea and I had every intention of slamming my thumb into that panic button if I needed it but I opened my eyes and was fine. The top of the scanner wasn’t millimetres above me, there was quite a lot of room and I wasn’t shitting myself. Bonus. I quickly closed my eyes again though, didn’t want to jinx it.

When the third song began my forehead became really itchy. Again, absolutely nothing I could do until the scan was over so I attempted to lose myself in Take That. Before the song was over the table was moving and I was free.

I told the nurses about my itch right away and gave it a little scratch whilst they commented on how Scouse I sounded. Then we chatted about accents and had a giggle before I was wheeled back to my comfy wheelchair and Ian collected from the waiting room to help me change.

I was in pain. My back hurt. My hips hurt. My shoulder was burning. I wanted to get home.

That evening we ordered pizza and chilled in front of the telly. For some reason I was really proud of myself. I guess because every other time I’ve really worked myself up and had a panic attack but this time I managed to open my eyes in the machine. It might not sound like a big deal but it was major for me.

Hopefully I get the results soon. I’ll keep you all updated.

Do you like these ‘a day in the life’ type of posts?