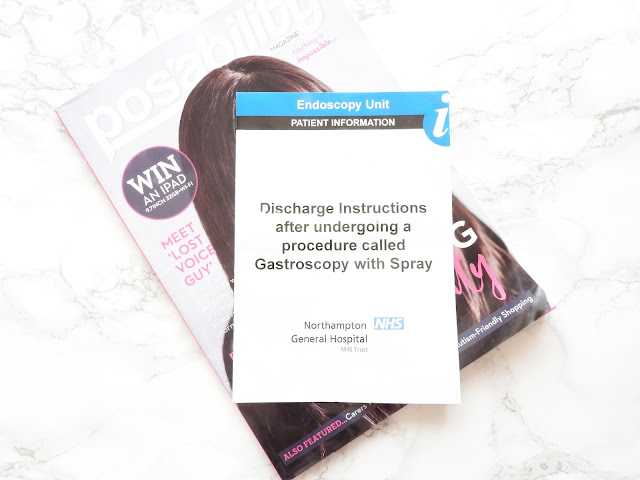 After I wrote a detailed post about my last MRI scan a few people stated that they liked that kind of post and if I had any other procedures to write about those too. So here I am sharing all the secrets to my latest test at the Endoscopy Unit.

I had a gastroscopy which is a non-surgical procedure that involves a camera going into the mouth and down the oesophagus into the stomach.

Despite being chronically ill for seventeen years, having a long-list of invasive and uncomfortable tests, I had never had an endoscopy. I’ve had a colonoscopy but that’s a whole different story. I wasn’t nervous or concerned about the procedure but I certainly wasn’t looking forward to it.

My appointment was on Wednesday 5th July at 2pm and on my letter I was informed not to eat or drink anything six hours before the procedure. As I take a lot of medication, I wouldn’t have been able to cope without painkillers so called the ward the day before and was informed I could take my meds no later than 10am. I also don’t do mornings so set an alarm for 10am, woke up, had medication and went back to sleep for an hour.

We left for the hospital and all I could think of was what I was going to eat later on that day. After giving my details in at reception, I waited a few minutes before being called in by a nurse. Ian was allowed in during my admission but then had to go and wait in the waiting area. I gave in all my forms, received my snazzy hospital bracelets and answered some medical questions.

Then I was taken to the ward and since I wasn’t having sedation I didn’t have to change into a gown, just take my shoes off and get comfy on my bed. I was the youngest on the ward and every other patient had cannula’s in their arms so I began to wonder whether I should have opted for sedation. My Mum had informed me she’d had the procedure without sedation and I would be fine so I tried to focus on that. I also had nobody to drive me home and cannula’s freak me out so the spray it was.

I was texting Ian and Elle whilst waiting to be taken into the procedure room and it seemed to take ages. After about forty-five minutes a nurse came through and called my name. My bed was then wheeled out into the corridor and into a side room.

The room was white, clinical and full of machines. I thought I’d be panicking at this time but I was fine because the staff were so incredibly lovely and instantly made me feel at ease. The doctor explained everything that would happen and told me if I wanted to stop at any time to raise my hand. She then numbed the back of my throat with the throat spray. She said it was meant to have a banana flavour but it was vile and as soon as it hit my mouth I knew she wasn’t lying. Almost instantly my throat felt like it was swelling and it was well and truly anaesthetised in seconds. The feeling was similar to, but much more intense than having a jab in the gums at the dentist.

I was then asked to lie on my left side, my glasses were removed and a guard was put in my mouth. This was to protect my teeth and keep my mouth open so the instrument could pass through. The instrument was then placed at the back of my tongue and I was asked to swallow. During this time my nurse was stroking my hair and telling me to focus on my breathing. I had my eyes open at the time and could see the doctor pushing the camera further into my oesophagus which was making me feel uneasy so I closed them and kept them closed.

It was the strangest sensation that was extremely unpleasant. It didn’t hurt but it was uncomfortable and I wouldn’t like another one any time soon. The nurse continued to talk to me and keep me as calm as possible, and then used a suction tool to remove any saliva in my mouth. Then the doctor told me she was going to inflate my stomach with air, that it would be uncomfortable and I would retch. I felt bloated and instantly began choking. That, whilst having the probe down my throat made me panic and I felt like I couldn’t breathe. I was considering raising my hand but the doctor told me she was removing the gastroscope and I would retch again. This time it wasn’t as bad because I knew it was almost over.

The instrument was removed, I was wiped down, given a tissue and told how well I did. I was so relieved it was over. The doctor then explained she had found a hernia in my oesophagus and because I was having so many problems with choking and swallowing I would need it operating on. The joy.

The gastroscopy lasted approximately five minutes and although I hated it, I’m glad I didn’t get sedated because it was such a quick procedure. If I ever (and I really hope I don’t) have to have another one, I would do it the same way.

I was then taken back to the ward, the nurse helped me put my shoes on, gave me my notes and I wheeled out to Ian. My throat was still pretty numb and I desperately needed painkillers. However, I wasn’t allowed to eat or drink anything for half an hour. Later that night I felt sick and didn’t really have an appetite but I ate because I had to.

And that was the gastroscopy. Tomorrow I’m heading to Leicester for more oesophageal tests so will no doubt give you the low-down on how that goes next week.